Jude was seven when her parents were murdered and she and her two sisters were stolen away to live in the treacherous High Court of Faerie. Ten years later, Jude wants nothing more than to belong there, despite her mortality. But many of the fey despise humans. Especially Prince Cardan, the youngest and wickedest son of the High King.

To win a place at the Court, she must defy him—and face the consequences.

As Jude becomes more deeply embroiled in palace intrigues and deceptions, she discovers her own capacity for trickery and bloodshed. But as betrayal threatens to drown the Courts of Faerie in violence, Jude will need to risk her life in a dangerous alliance to save her sisters, and Faerie itself.

I knew I wanted to read this book, but I was hesistant to actually buy a copy for myself. I was so glad when the January OwlCrate came in. I was incredibly surprised when I opened the box and voila! The Cruel Prince was at the bottom of the box.

The Cruel Prince drew me in so quickly! I didn’t want to stop until I had finished reading the book.

“If I cannot be better than them, I will become so much worse.” 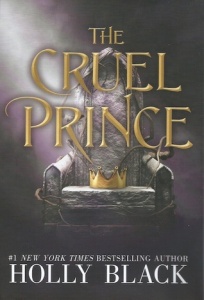 Don’t get me wrong, The Cruel Prince is still pretty interesting! It kept me raptured while I was reading the book. Even when I put down the book I thought about what would happen next. However, the highlights of this book for me were the absolute beginning of this novel, and the very end — when that plot twist took over the ending.

While I was reading, I didn’t contemplate or predict that anything would happen. I didn’t want to think of what would happen next. I just let myself enjoy the story — which was so nice by the way. However, I cannot deny the fact that the ending of The Cruel Prince totally, 100%, blew me away. I cannot wait for the next book!

The characters in this book are top notch honestly. Jude herself especially. She doesn’t really seem to lie to herself at all. Meaning, she’s brutally honest and says whats on her mind whether the person/people she’s around like it or not.

I also really liked the romance. I can tell you that this romance for sure wasn’t insta-love. It was more of a burning-hatred-turned-attraction.

“Most of all, I hate you because I think of you. Often. It’s disgusting, and I can’t stop.”

Another thing that I liked about The Cruel Prince is that there were twists and plots, but it wasn’t until the very near ending of the book where I read the best plot twist of this book. I seriously didn’t expect what to happen to happen, yet it did, and I’m still amazed and awestruck by it. And it wasn’t until the end why I realized this first book is called The Cruel Prince.

I gave The Cruel Prince, 3 stars on GoodReads.

Have you read The Cruel Prince? Or any other of Holly Black’s books?