Which is slightly upsetting on my part because September is my favourite Autumn month. 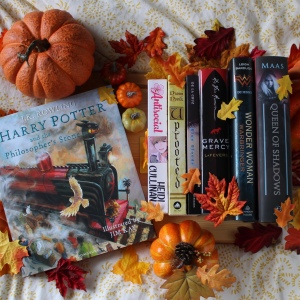 I don’t know about you, but for me September screams “new beginnings” to me.  Which is why I figured that at the beginning of September my mind kept reaching for romance novels. Just….romance novels. Which is odd, but I guess it’s the whole coziness that had me lovey-dovey.

Yet I knew that I also wanted to read fantasy books! Characters who are assassins, or characters just finding out that they have magic themselves. Or maybe these characters are falling in love for the first time.. Maybe all three?! I had no idea. But my mind was screaming “romance romance romance” to me, and I had to try and oblige, hahaha.

I had no set TBR for September, but I did want to read a few of the books that I own. Whether that book I read would be a re-read, or reading the story for the first time. END_OF_DOCUMENT_TOKEN_TO_BE_REPLACED

State of the ARC meme

State of the ARC is a monthly meme at Avalinah’s Books meant to motivate you to finish up all you long overdue ARCs (Advanced or Early Reader Copies). You can tack your reading progress and link up with your own post. Most commonly it comes out on the 30th of every month.

Hello! Welome to my eighth (8th) State of the ARC meme post! I was especially excited about September since September, in my mind, launches the start of so many new beginnings. Maybe because grade-school in Canada starts in September. Which means reconnecting with old friends, and starting new friendships!

Yes, I was pretty excited about September this year, haha.

My one and only goal for September, ARC-wise, was to get my Netgalley Feedback Ratio (FBR) up to 65%. I ended August with a 61% FBR, and just wasn’t satisfied with that. So let’s see how I did this month!

**Disclaimer: I received an Advanced Reader Copy from the publisher via Netgalley in exchange for an honest review. This in no way impacted my review.**

Twice Dead is the first (1st) book in the Necromancer’s Song series by Caitlin Seal.

In this imaginative debut perfect for fans of character-driven fantasies like Graceling and Daughter of Smoke and Bone, seventeen-year-old Naya Garth becomes one of the undead and an unlikely spy for her country.

Naya, the daughter of a sea merchant captain, nervously undertakes her first solo trading mission in the necromancer-friendly country bordering her homeland of Talmir. Unfortunately, she never even makes it to the meeting. She’s struck down in the streets of Ceramor. Murdered.

But death is not the end for Naya. She awakens to realize she’s become an abomination–a wraith, a ghostly creature bound by runes to the bones of her former corpse. She’s been resurrected in order to become a spy for her country. Reluctantly, she assumes the face and persona of a servant girl named Blue.

She never intended to become embroiled in political plots, kidnapping, and murder. Or to fall in love with the young man and former necromancer she is destined to betray.

What caught my eye about Twice Dead was that the synopsis tells us that there’s some sort of necromancy that goes on in the story. I’ve read a book series in the past where there was major necromancy involved before, and I really enjoyed it. So I was particularly looking forward to reading Twice Dead to see what would happen.

I went into reading Twice Dead not expecting anything—-rather, I just wanted to sit back and let the story happen as it did. And I’m glad I did! END_OF_DOCUMENT_TOKEN_TO_BE_REPLACED

Hello friends! It’s that time of month again! Where I talk about the books that I’m interested in, which are being published next month! I’m actually really excited about this months’ post, because there is so much Fantasy! I guess Autumn is a super popular / great time to publish Fantasy books. Never fear though! There are a few YA Mystery books in here.

Let’s get onto the post, shall we? Here are the books that I’m looking forward to being published this September of 2018! There were actually quite a few books this month that caught my eye, which surprised me. END_OF_DOCUMENT_TOKEN_TO_BE_REPLACED

Hello lovelies! Welcome to another Wrap Up! I guess it’s just that time of the month for this, eh?

Last month was an exceptionally good reading month for me. This month I still managed to read quite a few books. I even wanted to try and read about 5 or 6 ARCs, since last month I read 10(!!). I want to catch up on them (I have so many *stress-cries*). While I’m glad to say that my feedback ration on Netgalley has gone up, that’s only because the ARC’s that I tried to read just weren’t for me. At all.. END_OF_DOCUMENT_TOKEN_TO_BE_REPLACED