I didn’t know what April would bring, reading wise. For the first week of April I only read one book, and that’s kind of out of character for me, since I typically bing-read for the first week of the month. I was reading though. Just not books, nor manga. I discovered Webtoons! I’ve been really enjoying it, and getting to know more art styles, stories and characters. I’ve had a blast so far, using that app.

Hello! Welcome to my monthly, end of the month Wrap-Up & -sometimes- Book Haul where I talk about my readings, posts, as well as talk a little about what has happened in my life in the spans of the month. 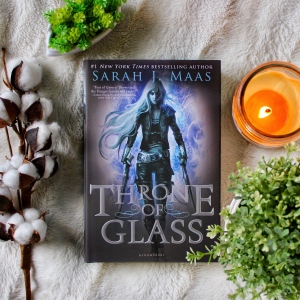 When magic has gone from the world, and a vicious king rules from his throne of glass, an assassin comes to the castle. She does not come to kill, but to win her freedom. If she can defeat twenty-three killers, thieves, and warriors in a competition to find the greatest assassin in the land, she will become the King’s Champion and be released from prison.

Her name is Celaena Sardothien.

The Crown Prince will provoke her. The Captain of the Guard will protect her.

And a princess from a foreign land will become the one thing Celaena never thought she’d have again: a friend.

But something evil dwells in the castle—and it’s there to kill. When her competitors start dying, horribly, one by one, Celaena’s fight for freedom becomes a fight for survival—and a desperate quest to root out the source of the evil before it destroys her world.

This is my second time reading Throne of Glass (though I’ve tried multiple times over the years to read it again), so my insights on the story are a little END_OF_DOCUMENT_TOKEN_TO_BE_REPLACED

I was tagged on tumblr to do the eleven questions tag. Since there isn’t an “official” title for this tagged, I’ve dubbed it to be the Eleven Questions tag. Original, huh? So I was tagged by fae-sass-queen on tumblr. You can see her answers to the questions she was asked here.

Her set of questions are:

1.) What is your favourite book quote?

Just one?! I can’t do just one.. END_OF_DOCUMENT_TOKEN_TO_BE_REPLACED

When it comes to fictional items, there is almost anything under the sun. And with what fictional items I know of I know of the bad and good that follow the items. Most of the time, the bad always outweighs the good so I end up not wanting at all. Why would you want an item that’s just going to bite you in the ass later?

With that in mind, I thought long and hard about any fictional items I would want. I’ve thought about the consequences about said items, and I’ve only come up with three fictional items that I would love to have.  END_OF_DOCUMENT_TOKEN_TO_BE_REPLACED

Hello loves! Today’s Top 5 Wednesday post is about Best Suggested Books You Loved. Basically books that were suggested to me and I ended up loving. I’m sure there are many, I just can’t remember them! Don’t you hate that? When you feel like you were put on the spot, and you forget every book you’ve ever heard of. There are a few books that I remember being recommended to me, and five of those book are… END_OF_DOCUMENT_TOKEN_TO_BE_REPLACED