Hello, friends. Today I have my book review of

Sky in the Deep, by Adrienne Young.

Raised to be a warrior, seventeen-year-old Eelyn fights alongside her Aska clansmen in an ancient rivalry against the Riki clan. Her life is brutal but simple: fight and survive. Until the day she sees the impossible on the battlefield—her brother, fighting with the enemy—the brother she watched die five years ago.

Faced with her brother’s betrayal, she must survive the winter in the mountains with the Riki, in a village where every neighbor is an enemy, every battle scar possibly one she delivered. But when the Riki village is raided by a ruthless clan thought to be a legend, Eelyn is even more desperate to get back to her beloved family.

She is given no choice but to trust Fiske, her brother’s friend, who sees her as a threat. They must do the impossible: unite the clans to fight together, or risk being slaughtered one by one. Driven by a love for her clan and her growing love for Fiske, Eelyn must confront her own definition of loyalty and family while daring to put her faith in the people she’s spent her life hating.

Hearing about Sky in the Deep made me excited about Eelyn’s story…but I had trepidation about reading Sky in the Deep since I’d never read from Adrienne Young. I didn’t know what to expect from her writing.

Sky in the Deep is a fast paced story which is good; it kept me reading the book. END_OF_DOCUMENT_TOKEN_TO_BE_REPLACED

A Curse So Dark and Lonely, by Brigid Kemmerer.

A Curse So Dark and Lonely is the first book in the Cursebreakers trilogy. 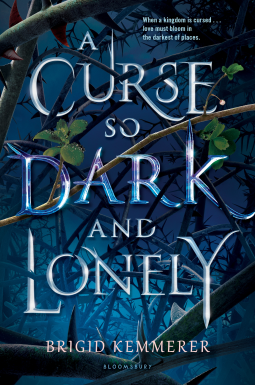 Fall in love, break the curse.

Cursed by a powerful enchantress to repeat the autumn of his eighteenth year, Prince Rhen, the heir of Emberfall, thought he could be saved easily if a girl fell for him. But that was before he turned into a vicious beast hell-bent on destruction. Before he destroyed his castle, his family, and every last shred of hope.

Nothing has ever been easy for Harper. With her father long gone, her mother dying, and her brother constantly underestimating her because of her cerebral palsy, Harper learned to be tough enough to survive. When she tries to save a stranger on the streets of Washington, DC, she’s pulled into a magical world.

Break the curse, save the kingdom.

Harper doesn’t know where she is or what to believe. A prince? A curse? A monster? As she spends time with Rhen in this enchanted land, she begins to understand what’s at stake. And as Rhen realizes Harper is not just another girl to charm, his hope comes flooding back. But powerful forces are standing against Emberfall . . . and it will take more than a broken curse to save Harper, Rhen, and his people from utter ruin.

I was so, so excited to read A Curse So Dark and Lonely… and that’s why I believe that I didn’t end up enjoying it as much as I wished I had.

Let me get this straight though, I still kinda enjoyed the novel.

END_OF_DOCUMENT_TOKEN_TO_BE_REPLACED

Kingdom of Ash and Briars, by Hannah West.

Kingdom of Ash and Briars is the first book in The Nissera Chronicles.

My review of KOAAB has some minor spoilers in it.

Bristal, an orphaned kitchen maid, lands in a gritty fairy tale gone wrong when she discovers she is an elicromancer with a knack for shape-shifting. An ancient breed of immortal magic beings, elicromancers have been winnowed down to merely two – now three – after centuries of bloody conflict in the realm. Their gifts are fraught with responsibility, and sixteen-year-old Bristal is torn between two paths. Should she vow to seek the good of the world, to protect and serve mortals? Or should she follow the strength of her power, even if it leads to unknown terrors? She draws on her ability to disguise herself as a man to infiltrate a prince’s band of soldiers, and masquerades as a fairy godmother to shield a cursed princess, but time is running out. As an army of dark creatures grows closer, Bristal faces a supernatural war. To save the kingdoms, Bristal must find the courage to show her true form.

Admittedly, I didn’t read too much into Kingdom of Ash and Briars—-speaking plainly, I didn’t read the synopsis other than figuring out that there was magic within the story.. END_OF_DOCUMENT_TOKEN_TO_BE_REPLACED

Hello lovelies! Today I have my ARC book review of

Cold Day in the Sun, by Sara Biren.

**Disclaimer: I received an Advanced Reader Copy from the  publisher via NetGalley in exchange for an honest review. This in no way impacted my review.** 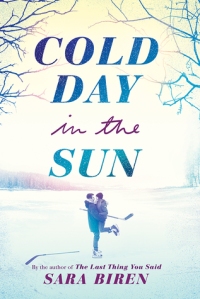 Holland Delviss wants to be known for her talent as a hockey player, not a hockey player who happens to be a girl. But when her school team is selected to be featured and televised as part of HockeyFest, her status as the only girl on the boys’ team makes her the lead story. Not everyone is thrilled with Holland’s new fame, but there’s one person who fiercely supports her, and it’s the last person she expects (and definitely the last person she should be falling for): her bossy team captain, Wes.

Cold Day in the Sun is a Young Adult Sports Contemporary Romance—-which is one of my favourite sub-genres. END_OF_DOCUMENT_TOKEN_TO_BE_REPLACED

Midnights is the story of Noel and Mags, who meet at the same New Year’s Eve party every year and fall a little more in love each time . . .

Kindred Spirits is about Elena, who decides to queue to see the new Star Wars movie and meets Gabe, a fellow fan.

Since these two stories are short stories, my reviews will also be on the smaller side.

Hello friends! Today I have my review of
Texting Prince Charming by Patty Carothers and Amy Brewer.

**Disclaimer: I received an Advanced Reader Copy from the authors in exchange for an honest review. This in no way impacted my review.** 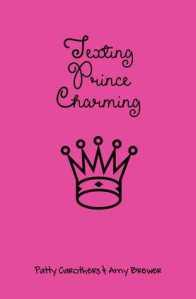 After a tragic accident leaves Shelby Ryan permanently injured, she gives up all hope in happily-ever-afters. Shelby puts on a brave face while hiding her pain, but once she returns to school, everything changes. She starts receiving anonymous corny messages from a mysterious Prince Charming, and her nemesis, basketball star and bad boy, Sebastian, shows sudden interest in her.

Hilarity ensues as Shelby tries to uncover Prince Charming’s real identity and come to terms with her true feelings for the last boy on Earth she ever thought she’d fall for: Sebastian Freaking Birch.

Will she be able to cope with the allure of the texting prince, or will Sebastian be the real-life prince in Shelby’s fairytale?