Hello loves! In this post I’m going to be reviewing the book,

Unwanted, by May Dawson.

Unwanted is the first book in the Their Shifter Academy series. 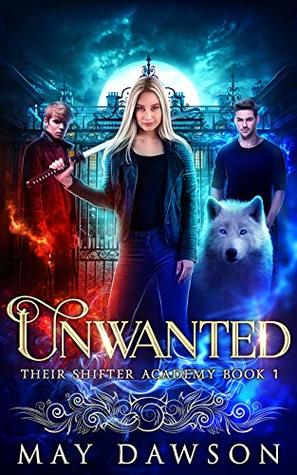 By the time I walk through the doors of the academy, where the born shifters of every pack are trained to fight and lead, I’m famous. Infamous? One of those.

I’ve already fought a battle or two. And my family’s complicated relationships with magic, which has been long forbidden to wolves, isn’t popular with all the packs.

I guess I should’ve said this is the place for born male shifters. There aren’t a lot of shifters like me, with flat irons and skinny jeans packed in their bags.

There’s quite the welcome committee waiting for me.

My cadre, who want to break me down and build me back up again into a fighter.

My bullies, who just want to break me.

My patrol, who rises or falls with me.

They don’t expect me to make it to graduation in four years.

But I know I will.

Who’ll be standing with me at the end?

Their Shifter Academy is a new reverse harem romance series, set in a military academy for shifters.

Unwanted was quite interesting, in the sense that the main character doesn’t really take no for an answer when she has her mind set on something. And I really do enjoy that she’s so resilient. Like yeah, she’s being bullied–and she has appropriate and genuine reactions to being bullied.

I like different points of view, even though we mainly read from MC’s view point.

I give Unwanted, 3 stars.

Have you read Unwanted, or anything else by May Dawson?

One thought on “Unwanted, by May Dawson | Mini Book Review”