Hello friends! In this post I have my book review of

Pregnant By The Pack, by Dizzy Hooper.

Pregnant By The Pack is the second book in the Broken Ladder Wolf-Shifters series. 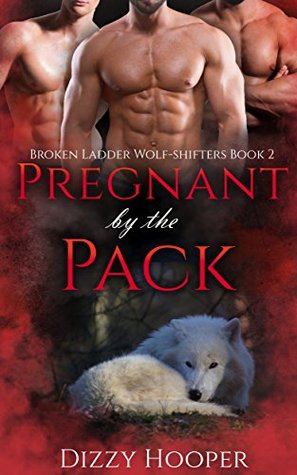 My mates have given me everything. But they want to give me one thing more … a baby.

For almost five months now, my new mates and I have been blissfully happy. I live for their love—their affection as well as their passionate touch.

But there’s an undercurrent of loss that I can’t ignore anymore.

When my mates reveal the tragedy that brought them together, their grief threatens to tear us apart.

It’s my job to help them heal.

But they want more. They want a family.

And the next time I go into my season, that’s exactly what they intend to give me…

Pregnant By The Pack is a steamy reverse harem paranormal romance, with dirty language and hot wolf-shifter alpha males. It is only recommended for readers 18+.

Unfortunately, Jessica’s actions are predictable—which was such a shame, honestly. I love a character that we can’t really rely on. Jessica’s character is one that doesn’t stray far from the norm. of the shifter world.

In Pregnant By The Pack there were emotional plateaus that were reached in this novel—characters showing more emotions, still going through the waves of grieving (not that it ever stops).

We’re also given a look into the after affects of the massacre that happened.

Most of all though, is how much sex there is in this book. Honestly, while the character development is minimal… The growth of the characters both singularly versus everyone as a group, takes a far backseat to the main show that this book provides: sex-sex-sex.

I give Pregnant By The Pack, 2 stars.

2 thoughts on “Pregnant By The Pack, by Dizzy Hooper | Book Review”