Hello lovelies! Today I have my book review of

Queen of Storms, by C.N. Crawford, and Katerina Matrinez.

Queen of Storms is the first book in the Institute of the Storm Fae series/trilogy. 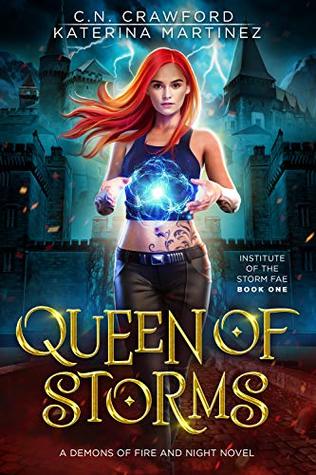 In the hallowed Storm Fae Academy, everyone has a secret.

It sucks to be a supernatural fugitive, but as a fae witch, what can you do? Get on with things. Ignore the elite fae assassins who rule the city. Try not to freak out when one of them surprises you mid-shower. Usual stuff.

But when the assassins capture my best friend, I’ll do anything to stop her execution. Including joining their academy. Now, while I secretly plot to break Wren out, I am forced compete in a lethal set of trials. Failure means that a monstrous headsman kills us both.

Turns out I have to train with a dragon-blood fae. He’s powerful, scary, and lethally attractive. And, like me, he’s harboring dark secrets.

Worst thing about him? He’s the monstrous headsman himself.

This book is from the Demons of Fire and Night world, with characters who appear in Court of Shadows.

Let me start off my review of Queen of Storms by saying that while I didn’t know what was going to happen within Cora’s story, I had incredibly high hopes.

Now let me say that Queen of Storms hadn’t happened in the way that I hoped it would, but in the end was still predictable. I knew right away that there was something up with Cora’s friend and in regard to Cora’s BFF, the story was pretty translucent.

Cora is interesting in the fact that Cora has immense, powerful abilities. But beyond that, Cora’s character fell flat.

I did enjoy the two chapters that we got from a certain someone. I was hoping that we’d get a little bit of this character’s view point. I’m so glad that we got to read from their point of view–especially so because this character has a heavy presence in the story.

In terms of fighting and (not sex) action, there were scenes that had me close to the edge of my seat from the start of Queen of Storms. Actually the first scenes was quite humorous.

I didn’t not not like Queen of Storms, but I won’t be reading more of the series. In the end, Queen of Storms could not keep me entertained as much as I had hoped it would have.

I give Queen of Storms, 2 stars.

Have you read Queen of Storms? What did you think of it?

Unfortunately, QoS was a huge miss for me.

One thought on “Queen of Storms, by C.N. Crawford, Katerina Martinez | Book Review”