Hello friends! Today I’ve got my book review of

Demon Slayer is the first book in the Dragon’s Gift: The Sorceress series. 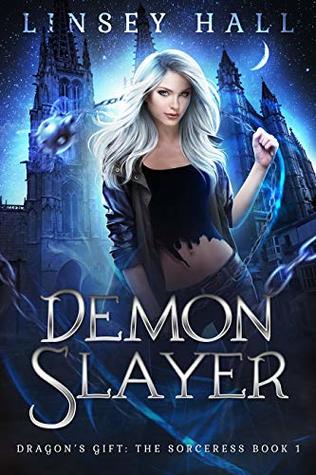 Got a demon that needs killing? I’m your girl.

On paper, I’m a Blood Sorceress. I can whip up the spells of your dreams. It’s a legal occupation–barely–but mostly a cover.

My real job is protecting my city from the monsters of the Dark Realms. I’m the resident demon slayer, and occasionally those suckers escape. Then it’s up to me. I’ve even got a side hustle using their blood for my sorcery biz. It’s gruesome, but that’s life.

Things get complicated when I start clashing with a sexy AF bounty hunter. His name’s Declan, and we’re after the same necromancer. Bounty hunters are my enemy, and his stupidly hot body keeps getting in my way.

The only way to save the city is to team up with Declan. I have two goals: don’t kill him & don’t screw him. Both easier said than done, since self control isn’t really my thing. But it’s a race against time to catch the demon, and there’s no way in hell I’ll fail at that.

Demon Slayer is a fast-paced urban fantasy adventure starring a kick butt heroine, a powerful hero, and magic that will blow your socks off.

Aeri’s story is go-go-go right from the start, and let me tell you friend, Demon Slayer IS SO ENTERTAINING. The fact that this book has a fast story, only made my reading experience even faster. Seriously–I managed to read this one in a few hours.

Since Demon Slayer is a fast paced story, there’s nonstop action and quite a few fighting scenes from the start of the book. Literally the first page started off with Aeri chasing after her kill.

Beyond the fighting and action scenes, there’s magic laced throughout the story. I mean, Demon Slayer, Aeri… everything in this story seems to have been steeped in some magic for a few hours (like tea), that’s how strong the magic is in Demon Slayer. And I loved it. I loooove the magic in this one. Demon Slayer is an urban fantasy; naming some towns, even a country, by name within this first book.

Aeri is a character that I absolutely loved from the beginning. She’s feisty and has a few different faces to her. Which is such a Mood, because same. Like myself, Aeri likes to have a few different masks that she shows to the world–though these personas are all truly Aeri. Yet there’s a softer side that she only shows to her sister, since they’ve both escaped some horrible life situations when they were teenagers.

There’s some serious lust between Aeri and Declan. Not much happened between the two of them in this one aside from some heavy looks and quick jabs about a date. With how the story was told, and the chemistry between these two, I know they’ll be a thing, if not in the second book, then 100% in the series overall.

Honestly, I didn’t know what to think of this one prior to reading it, aside from the magic aspects. However this book turned out to be way more exciting than I had anticipated. And with how Demon Blood had ended, I’m quite excited to read the next book.

At the end of Demon Slayer, I was kind of bummed with how this first book ended. I mean, that minor plot twist even took me by surprise! Yet I now only want to start reading book 2 ASAP.

Have you read Demon Slayer? What’d you think of it?