Hey friends! Today I have my book review of

Shunned is the first book in the Kings of Miskatonic Prep series. 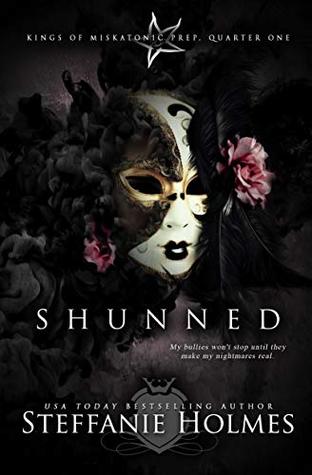 I should have kept my mouth shut.
I should have let them win.
Now the kings of the school are out for my blood,
… and they’re not the only ones.

The fire took everything.
My parents. My best friend. My life.

Now I have a second chance.
I only have to endure one year at this prestigious academy for rich snobs.
One year of being the charity case no one wanted.
One year of taunts and insults and bullying. Then I’m free.

But I didn’t count on Trey, Ayaz, and Quinn.
Arrogant, privileged, dangerous.
Drop-dead fucking gorgeous.
They want me gone.
They want me to suffer.
They’re determined to make my nightmares real.

Tough luck, bully boys – I won’t hide away.
I’m not afraid.
But maybe… I should be.

Shunned is a dark and heavy novel. I would not suggest reading this book at all. Especially if you’re looking for a light read. Like, no.

Reader, let me just start out this book review that I was so incredibly angry while I read this book. I felt Hazel’s anger, I knew her anger. I felt like I was her anger. There are so many different things that made me angry about while reading Shunned. And this book left me with more questions than answers.

I could only stomach the happenings of this novel because I needed to know how Shunned ended.

Shunned is my first ever Bully Romance read, and to be honest I didn’t know what to expect. I of course knew that there’d be bullying involved, but how that turns into romance is beyond me.

There’s only one point of view within Shunned, and that’s from Hazel. We see her bullied beyond belief, and she still endures it. Hazel isn’t one to sit around and let herself be bullied so she does retaliate.

The beginning is absolutely deplorable. And the middle and ending aren’t at all that much different.

Upon finishing Shunned, I had so many questions—and absolutely no answers.

Questions: what inspired the author to write this story? Especially with how the main character was treated?

When I finished Shunned, I realized that the synopsis for this book is very sneaky.

After I finished reading Shunned, the book took a back seat in my mind. I was thinking about this book, and where the story might go. And though I’m curious about where the story could lead to… I’ve decided that I’m not going to go on to read more of the series.

So while my review may be all over the place, messy and maybe even confusing, I do have final thoughts on this story. Though it should be obvious… I didn’t like it.