Hello friends! Today I have my book review of Wolf Called, by Sadie Moss.

Wolf Called is the second book in the The Last Shifter series. 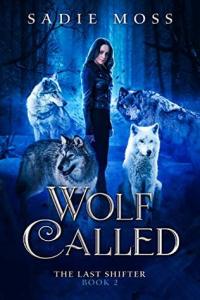 My world was a gray blur until I met them. My shifters. The men who rescued me from the lie I was living.

For a brief moment, even in the midst of chaos, I found happiness.

Then Strand found me again.

Now my new life hangs in the balance.

Doctor Shepherd isn’t done with his little experiment, and he wants me back, alive. When Strand hunters rip me away from everything good I fought so hard for, something inside me snaps.

But when my wolf is finally called, her untamed power upends everything in my life—including my relationships with the four shifter men who mean more to me than anything.

There’s a monster inside me. And she’ll either save me or destroy me.

Much happens in this second Last Shifter novel. We start Wolf Called in action, and from there the action doesn’t really let up. In fact, Wolf Called is pretty much go-go-go non-stop—-even when there are slow parts in the story.

There’s always something Driving these five to go forward, which makes the story progress that much faster.

I’m glad that there was development with Alexis and her Wolf. The progress was great to read. I know that this may sound silly, but I’m glad that the internal war that Alexis had with her Wolf was included in the story.

There were things revealed about certain characters that made me saddened to read about. Yet I’m glad that the …. events were talked about.

I was so happy that the mate bonds were coming along quite nicely!

At the end of Wolf Called, I’m glad that Alexis and her guys achieved their goal, and I’m glad that they’ve found somewhere to stay. Though if I know this group well enough (and I like to think that I do) Alexis and the others won’t be staying there for long..

The ending to Wolf Called had me worried about Alexis’ worries, and what they might mean for the next book, Wolf Claimed. I have so many questions for the Wolf Claimed.

I give Wolf Called, 3 stars.

Have you read anything by Sadie Moss?