The Silver Stag, by Yasmin Galenorn.

The Silver Stag is the first book in The Wild Hunt series. 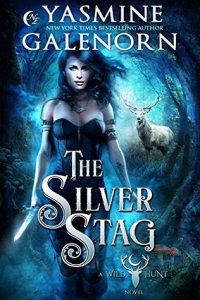 Life isn’t easy when you bear the mark of the Silver Stag.

Caught between the worlds of Light and Dark Fae, Ember Kearney was born with the mark of the Silver Stag. Rejected by both her bloodlines, she’s turned her back on her people to become a freelance investigator, hiring herself to take care of common problems like hen-stealing goblins.

When Ember’s best friend asks for her help, it leads them both into a glittering world of conspiracy and danger. Angel’s little brother has vanished, and Ember must race against time to save his life. But when Ember discovers what’s happened to DJ, both she and Angel find themselves recruited into Herne’s elite squad of bounty hunters. Now, Ember must not only face her heritage, but she’s bound to preserve the balance between the Fae Courts, for if order isn’t maintained, war and chaos will spill out into the mortal realm.

The Silver Stag is a book that I bought, hoping that it’d be interesting. I’m happy to say that I actually enjoyed reading this first book in Ember’s story. I’m quite captivated by The Wild Hunt story, and I have no idea what’s truly in store for the future novels.

I truly had a very enjoyable time reading this one. It wasn’t too fast, but it wasn’t entirely slow either. Honestly the action in this book is great to read. I felt very engaged in everything.

The plot moves really well—flows very nicely. The writing was nice and easy. Actually The Silver Stag was super easy to read. I liked how there were explanations for some of the things that we read about, but they weren’t long at all (always a plus). We don’t get bombarded with this worlds history, and frankly, I was never bored while I read this book.

I liked the slow-burn romance between Herne and Ember. Even though at this point it’s more lust than romance.

Ember is an adult in this novel. I actually adored Ember. Ember, although is fae, was raised human. I won’t tell the ‘why’ since I don’t want to spoil anything. Ember is a character who stands up for herself, no matter who she’s talking to. I really enjoyed how Ember took some things into her own hands. Ember isn’t a princess waiting to be saved–rather, she’s the heroine of her own story.

I also liked how the relationship that Ember has with her BFF, Angel. They really do work well together. Though I hope nothing bad happens to Angel..

One thing that I hope happens in the next book(s) is that we get to learn more of Ember’s history, her lineage–stuff like that.

Overall, I give The Silver Stag, 3 stars.

Have you read anything by Yasmine Galenorn? If so, what have you read, and did you enjoy it?

The Silver Stag is my first Yasmin Galenorn novel. By the end I was rather invested in the story. So I’m continuing with the next book Oak & Thorns hopefully soon!

One thought on “The Silver Stag, by Yasmin Galenorn | Book Review”