Hello friends! Today I have my review of Sold To The Werewolf Prince, by Daniella Wright.

The collar on my neck reads Tamkin the Fourth.
I have been assigned to an alien Prince.
And I am to bear his child. 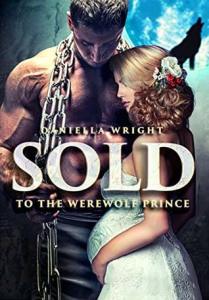 My ship was taken and my crew imprisoned.
They put us on trial. I watched others die in front of me.
Why would a prince be attending a trial?
I still don’t know the answer, but that may have just saved my life.
Lucky, you may think?
Not so sure.
One wrong insult in the wrong place – and they’ll execute me in the blink of an eye.
Either I hold my tongue – or I’m gone.
Such a shame I don’t do well with rules.
He wants a baby? He’ll get a baby.
But wait until I’m pregnant and I can open my mouth.
What is he going to do?
Kill me? I doubt it.
I’m going to make his life a living hell.
This is a stand-alone novel with an HEA.

Looking back on what the synopsis provides us, versus what actually happened within Sold To The Werewolf Prince… I ended up being disappointed. The reason that that is, is because the synopsis led me to believe that Hannah would be more feisty than she actually is.

Within Sold To The Werewolf Prince, there are two points of view. What I didn’t like about the two points of view doesn’t have anything to do with the characters themselves. My problem is that there was no visual indicator to let me know whose point of view was whose. —- Admittedly though, I could easily discern both Hannah and Tamkin’s view points from one another.

There’s quite a lot that packed into this story. The plot moves quickly, but not too quickly–the plot doesn’t move at warp speed. I was able to sit back and enjoy the story.

I liked learnign about Vethor, and some of the spacey bits. I’m not a huge Sci-Fi fan, so I enjoy when a story doesn’t focus on the mechanics of space-travel, or even the ship that they use.

I give Sold To The Werewolf Prince, 2 stars.

Thanks for stopping by!