Hello friends. Today I have my review of Girl, Bitten by Gracely Knox, and D.D. Miers. 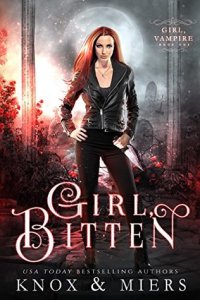 Death has come for the undying.

As a genetics graduate student, Sasha Keleterina knows a thing or two about blood. She’s courageous, capable, and not the kind of woman in need of saving. But when she’s attacked in her lab, she barely escapes with her life—only to find out she’s becoming one of the undead.

A deadly virus is poisoning vampires in the Portland area, endangering them all. Master vampire Arsen Eskandar is desperate to prove himself and save his people. Following the trail of a recent attacker, Arsen encounters Sasha. She’s beautiful, intelligent, and a fighter, and the attraction between them burns like wildfire. But when the master of a rival clan declares Sasha is not only his—but the cure —a centuries-old war between two ancient vampire clans rises to the forefront and a battle to claim Sasha ensues.

But they don’t know her. The only one Sasha is willing to be claimed by—is herself.

Truthfully, I gave Girl, Bitten a chance for the vampires, and the synopsis. Aside from that…. well..

Let me just tell you right here, right now, that I did not like Girl, Bitten.

What had initially intrigued me the most about Girl, Bitten was the synopsis, 100%. Once I started reading, I knew that the beginning portion of this novel was certainly interesting, and definitely a cause to read more of Sasha’s story.

Moving further into the book I realized that the rest of Girl, Bitten was pretty much all bullshit. There’s a lot of Territorial-Caveman (instead they’re vampires) That’s-My-Woman-BS that you’ve got to read through. I was honestly so bored in those moments. And there were a lot of them. I kept pushing through, because I genuinely wanted to know how Girl, Bitten would end.

Pushing past the caveman BS, there were quite a few parts in Girl, Bitten that just got to be too repetitive. Like, yes I know blah-blah-blah happened, and whodunit. I just read that a few pages ago.

Within Girl, Bitten a good portion of the dialogue in the first third of the novel felt forced and completely unnatural to me. However, the further we read into the story, the more natural the dialogue felt.

At the end of Girl, Bitten we find out that a certain character is a big ‘ol fuck boy. And I can’t tell you how much that turns me off. Seriously.

I’ll be positive and say that there were a few instances wherein the story managed to surprise me.

My final rating of Girl, Bitten is 2 stars.

I want to go on and read the next book, but I’m going to have to put reading Girl, Forsaken on hold. Purely so I can forget the shit of the bull that all of the characters in this story put Sasha through.

Have you read Girl, Bitten? What did you think of it?

Thank you for stopping by.