Hello friends! Today’s post is my review of Crown of Feathers, by Nicki Pau Preto.
I’m so excited for this one.

**Disclaimer: I received an Advanced Reader Copy from the publisher via Netgalley in exchange for an honest review. This in no way impacted my review.**

An Ember in the Ashes meets Three Dark Crowns in this lush debut fantasy novel about a girl who disguises herself as a boy to join a secret group of warriors that ride phoenixes into battle.

I had a sister, once…

In a world ruled by fierce warrior queens, a grand empire was built upon the backs of Phoenix Riders—legendary heroes who soared through the sky on wings of fire—until a war between two sisters ripped it all apart.

I promised her the throne would not come between us.

Sixteen years later, Veronyka is a war orphan who dreams of becoming a Phoenix Rider from the stories of old. After a shocking betrayal from her controlling sister, Veronyka strikes out alone to find the Riders—even if that means disguising herself as a boy to join their ranks.

But it is a fact of life that one must kill or be killed. Rule or be ruled.

Just as Veronyka finally feels like she belongs, her sister turns up and reveals a tangled web of lies between them that will change everything. And meanwhile, the new empire has learned of the Riders’ return and intends to destroy them once and for all.

Sometimes the title of queen is given. Sometimes it must be taken.

Crown of Feathers is an epic fantasy about love’s incredible power to save—or to destroy. Interspersed throughout is the story of Avalkyra Ashfire, the last Rider queen, who would rather see her empire burn than fall into her sister’s hands.

So a little spoiler here: I did not think that there would be more than 1 point of view, but there is. In fact, there’s three —- I thought I would end up not liking the two other points of view, but to my surprise, I did. And that is the last spoiler-y thing that I will mention in this review.

In the beginning, Veronyka was much more lighthearted. Almost like I dreamer, I’d say. Veronyka is a great character in my opinion. She makes mistakes, and she grows from them. She does whatever she can do help others. What’s more is that Veronyka learned to stand up for herself, for others, and for what Veronyka believes in.

Throughout Crown of Feathers, Veronyka manages to learn quite a bit. Veronyka manages to make all of these connections and I’ve got to think that all of this will shape up to another result in the second novel. In this first novel we definitely see how much Veronyka can withstand.

Another thing that I enjoyed about the characters within Crown of Feathers is that not everyone has an important job like playing the hero. Sometimes you’re not fit for that role, but the role that you end up playing wether behind the scenes or in the forefront is just as important.

Honestly though, there is so much that happened within Crown of Feathers. I can’t even begin to round up all I want to say in my review. 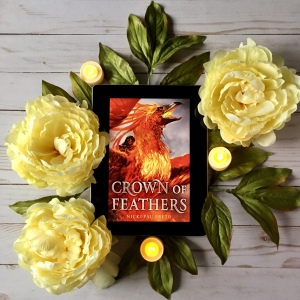 I would say that by the last third of this book, Crown of Feathers was rounding up quite nicely, and faster than I expected. Which is genuinely something that I didn’t expect — nevertheless enjoy.

In the end, I adored reading Crown of Feathers. I will admit that the first bit of the novel left me wanting to quit reading the book. But then I remembered a certain something about this book and I kept on reading!

I loved the fantasy aspects of this story. I loved getting to know the history, tips’n’tricks for being a bondmate to a Phoenix, and so much more.

Crown of Feathers is a great start to the story that is being told. I am truthfully looking forward to the sequel.

I give Crown of Feathers, 4 stars.

Does Crown of Feathers sound like a book that you would read?