First Lines Fridays is a weekly feature for book lovers hosted by Wandering Words. What if instead of judging a book by its cover, its author or its prestige, we judged it by its opening lines? If you want to make your own post, feel free to use or edit the banner above, and follow the rules below:

If you’re using Twitter, don’t forget to use #FirstLinesFridays!

‘The painting, three by four feet and propped on an easel in the center of the room, arrested Skylar Stone, emptying every thought from his head, save one. This piece of art was the most incredible thing he’d ever seen.
He paced a semicircle around the canvas, unconsciously hooking his index finger into his collar to loosen his tie, as if looking at this paining required more room to breathe. it assaulted his senses and made him too dizzy to think. How did it possess so many colors and yet seem kind of purply blue? there was gold in there, somehow, and red, and. . .God, everything. What was the figure in the foreground? A man? A dog? A boulder? Somehow it was all three. A hulking mass of darkness looking out at. . .stars. Or perhaps it was someone lying on a blanket. Or perhaps it was a gargoyle looking over a city. A city on fire.
Or maybe it was a city being formed?
It looked like a child had painted it. Or a grand master. It took Skylar’s breath away.
“I said, can I help you?”
Blinking, Skylar turned toward the speaker, a mousy, scrawny, hunched male student with a permanent glower stitched on his face.’ 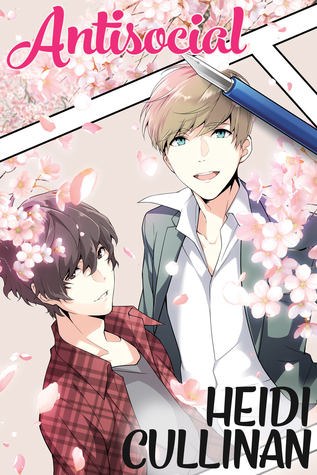 A single stroke can change your world.

Xander Fairchild can’t stand people in general and frat boys in particular, so when he’s forced to spend his summer working on his senior project with Skylar Stone, a silver-tongued Delta Sig with a trust fund who wants to make Xander over into a shiny new image, Xander is determined to resist. He came to idyllic, Japanese culture-soaked Benten College to hide and make manga, not to be transformed into a corporate clone in the eleventh hour.

Skylar’s life has been laid out for him since before he was born, but all it takes is one look at Xander’s artwork, and the veneer around him begins to crack. Xander himself does plenty of damage too. There’s something about the antisocial artist’s refusal to yield that forces Skylar to acknowledge how much his own orchestrated future is killing him slowly…as is the truth about his gray-spectrum sexuality, which he hasn’t dared to speak aloud, even to himself.

Through a summer of art and friendship, Xander and Skylar learn more about each other, themselves, and their feelings for one another. But as their senior year begins, they must decide if they will part ways and return to the dull futures they had planned, or if they will take a risk and leap into a brightly colored future—together.

Hi, yes I know that this one is a little long but I love these characters so much that I had to include the very beginning of their many interactions.

I’ve actually already read Antisocial before and I’ve reviewed it as well, but I just loved this story so much that I want to read it again sometime. I love the contrasting points of view that Skylar and Xander bring to the story. The storylines are also incredibly realistic as well. Which is honestly such a great plus to the story!

Antisocial is a New Adult novel.

Have you read Antisocial? What did you think of it?

One thought on “First Line Fridays | #2”