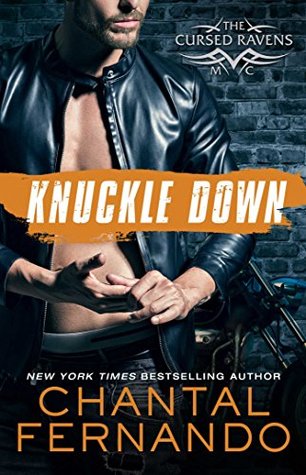 A single father struggles to change for his daughters and the woman he loves in this second book in the Cursed Ravens Motorcycle Club series from New York Times bestselling author Chantal Fernando.

As a single father of two girls and the sergeant at arms for the Cursed Ravens Motorcycle Club, Jack “Knuckles” Chester doesn’t have much free time. And having earned his road name from his reputation as a fighter, Knuckles isn’t one to back away from a challenge.

But what he’ll never admit out loud is that his two daughters have changed him irrevocably, softened him even. And these two girls are the only women who will ever hold his heart forever. That is, until he meets Celina.

Celina is nothing like the women Knuckles used to date. She’s a journalist for the local newspaper, and basically just has her life together. And the last thing she wants is to be involved with a Cursed Raven. But when the ripped, badass biker worms his way into her heart, she has trouble remembering all the reasons they would never work.

But when a shocking story is published her newspaper, it breaks the thin trust she has with Knuckles. Will she lose him forever? Or will Knuckles fight to keep Celina in his life?

‘Instalove is real, the connection is all too real, but none of that dictates if the relationship is going to last.’

I started reading Knuckle Down without having read the synopsis,—-since I loved Ace of Hearts so much– and I’ve got to say that I really enjoyed reading Celina and Knuckles’ story that way. Knuckle Down is such a whirlwind story!

There were so many ups and downs in this novel. There was so much emotional tension. But I really enjoyed how Fernando captured how life is sometimes.

I actually connected a lot with Celina myself, since I like to believe that I can control my emotions and only cry while watching movies. I also like how “modern” Celina is. She can do a lot of things by herself, doesn’t let a man take over her life, and Celina especially doesn’t let the one she is interested in dictate her life —- not that Knuckles ever would tell Celina how to live her life. 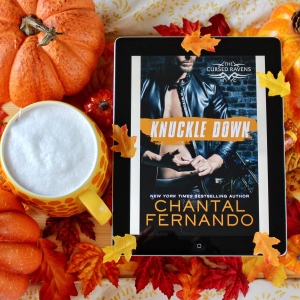 We read Knuckle Down in Celina’s point of view until the epilogue. I was kinda bummed that we didn’t get Knuckles’ POV in the story, but the little tidbit at the end in Knuckles’ point of view makes the ending all the more Celina and Knuckles’ story theirs.

Knuckles’ himself is actually a pretty cool dude, even if sometimes he acts like a 21st century caveman.

“Not being book smart doesn’t make you any less smart,”

I think you’d have to read the first book Ace of Hearts to know some background details that are brushed over in Knuckle Down. However, you could read Knuckle Down as a stand alone.

Knuckle Down was pretty good! I enjoyed getting to know more of the MC Ravens crew.

P.S. — There are some sex scenes in this novel.

One thought on “Knuckle Down, by Chantal Fernando | Book Review #402”