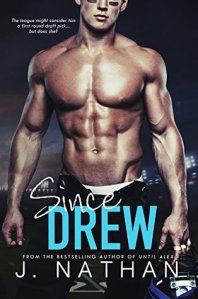 All Andi Parker has ever wanted, all she’s ever dreamed of, is a spot on the Olympic track team. But when an accident leaves her hospitalized with serious injuries and shattered dreams, she’s not only uncertain what her future holds but also completely alone.

Drew Slater is a wanted man. Professional football teams want him for his arm. Women want him for his irresistible good looks and charming personality. But the well-crafted disguise he wears, the one that helps him score on and off the field, hides secrets. Conceals lies. Threatens the happiness of everyone around him.

One chance encounter brings Andi and Drew together, changing their worlds in ways they never thought possible. Unfortunately, what they thought they knew about themselves—and each other—might just be the biggest lie of all.

Since Drew is a New Adult Romance, and yes, Since Drew contains sex scenes in the story.

I know I probably read the synopsis before buying a copy of this book, but when I started reading it I actually had forgotten what Since Drew was about. So when I read the entirety of Since Drew in one sitting…I didn’t know what to fully expect……for the most part.

What drew me in right away was the interesting prologue we’re given, and how the prologue pretty much ends mid-scene . Fair warning though, it’s in that prologue where the car accident happens. Said scene is over pretty quickly though. 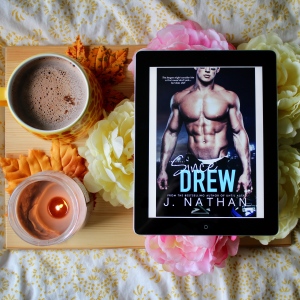 At the at the 25% mark there was a major plot twist that I was not expecting at all. Andi was pretty much turned on her head at that moment, and frankly, so was I.

Since Drew is a sweet story (where there are multiple sex scenes) but when the plot twists hits you, the rest of the story just gripped me and I couldn’t stop reading. I wanted to find out what happened. That’s honestly what I really enjoyed about Since Drew.

There was a part though that I was anticipating from the first chapter, and I dread to say it but the “big reveal” was something I had predicted the moment we meet a certain character.

I did enjoy reading the epilogue though. I totally wasn’t expecting the stories epilogue, and it was such a nice surprise.

Since Drew was a fast and enjoyable read. I believe I finished reading this book within a 3 hour time period.

I give Since Drew, 3 stars.