Thank you to Emilie Knight for providing me with a copy of Era of Undying in exchange for an honest review. This in no way impacted my review. 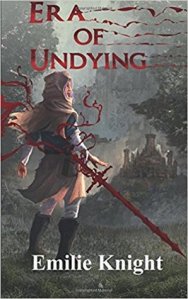 There hasn’t been a Blood Warrior for decades. Everyone assumed they were extinct and couldn’t return. Turns out they were just in hiding. Pen chose to revert back to her nomadic life after the death of her family. Life was always safer that way, away from people. Now she’s been caught and odd occurrences have been happening in Ichorisis. People are surviving horrible injuries and illnesses that they shouldn’t be. Now that Pen is under custody of one of the several kings she’s been sent to fix the problem. Whether she wants to or not.

Honestly, I loved Era of Undying. As a side fact, I love that Pen’s hair is dark purple, and that there are lots of other characters with wildly different colours as well–green, blue, etc..

I really enjoyed that this story is fast paced, and I like that while the story isn’t too detailed, a lot is left to the imagination of the reader. A side note though: Era of Undying is a little macabre, so if you do end up reading it, you have been warned.

Something that surprised me about Era of Undying was that there were two points of view. We first read from Pen, who -by the way- is awesome. We learn a bit of Pen in this story, and though I can’t quite put my finger on how to properly describe her character…  “resilient” will do for now! And then we read from Tellus’  point of view. I realized after finishing Era of Undying that I kind of miss his character.

The characters we meet along the way are great, too. I enjoyed getting to meet the people that Pen met. I won’t say more than that, lest I spoil the book!

I am not one to end up liking a book where the last sentence is practically ended mid-scene. However, the ending of Era of Undying was a great one. I like that the book ends as it does, that way the reader (if they so choose) could imagine the rest of Pen’s life.

I give Era of Undying, 5 stars.

If you’re interested in purchasing Era of Undying, you can do so on Amazon.