Thank you Angry Robot Books, via Netgalley for allowing me to read The Traitor God by Cameron Johnston in exchange for an honest review. 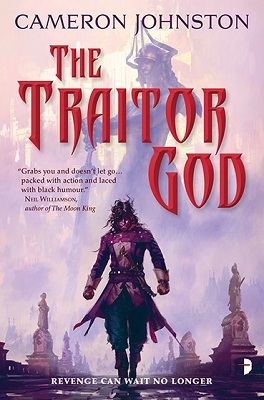 A city threatened by unimaginable horrors must trust their most hated outcast, or lose everything, in this crushing epic fantasy debut.

After ten years on the run, dodging daemons and debt, reviled magician Edrin Walker returns home to avenge the brutal murder of his friend. Lynas had uncovered a terrible secret, something that threatened to devour the entire city. He tried to warn the Arcanum, the sorcerers who rule the city. He failed. Lynas was skinned alive and Walker felt every cut. Now nothing will stop him from finding the murderer. Magi, mortals, daemons, and even the gods – Walker will burn them all if he has to. After all, it wouldn’t be the first time he’s killed a god…

What drew me towards The Traitor Gods was initially the cover; I mean, it’s beautifully illustrated, and it’s so interesting. There’s so much to look at! The second thing that drew me towards this novel was the title: The Traitor God.  The title alone sparks my imagination. I can honestly say that when the title drop happened, I did not expect it to happen in the way it did!

I also made a couple predictions along the way while reading, and one came true while the other was only half right. Anywho! The Traitor God is a High Fantasy novel, and something that I deeply appreciate is that the novel pretty much got underway a few pages into the book.

The Traitor God was certainly interesting, and at 15% into the novel there was already so much that had happened. I was almost overwhelmed honestly. If I hadn’t told myself that I was reading this book to the end, then I might have had trouble finishing this book.

The only thing that I didn’t particularly enjoy was that a lot of history is thrown into this novel. So much so that the dialogue between characters was disrupted so that we could learn some history. What I particularly didn’t like about this was in some instances, this history telling would end up taking chapters sometimes. Nevertheless, I understand that there was a lot to pack into The Traitor God though, so in the long run, I’m okay with it.

I truly liked seeing the gentler side to Walker. I especially enjoyed seeing the scene between Lynas and Walker when they were children.

Something that I should have expected with The Traitor God was all of the foul language that was spoken in this novel. There’s so much of it.

The Traitor God felt like such a long book. There was so much history packed into this story—-both the world’s history as well as Walkers history. Something that I truly enjoyed was the fact that even though Walker’s story is one of revenge, I felt like Walker’s story is also one of redemption.

I give The Traitor God, 3 stars.