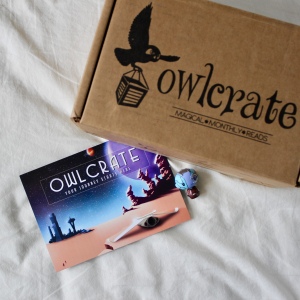 Hello hello hello! As you can tell by the title, today’s post is going to be my unboxing of the March OwlCrate box. I managed to avoid any and all spoilers pertaining to this box. I’m pretty proud of that, haha.

The theme for the March ’18 OwlCrate box was Across the Galaxy!

I’m a little disappointed that they didn’t have anything ZODIAC related to be honest.

OwlCrate has done it again! I wanted to buy this book, but held off because I have other books I want to buy first. 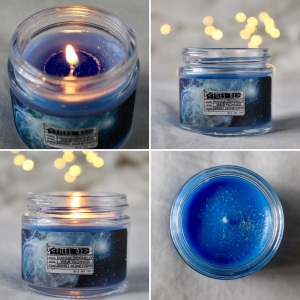 The candle! I always go immediately to the candles when I open these boxes. Like, wow. Especially for this Across the Galaxy box! The candle scent is called Sweet Honeydew, but maaaaan, the candle smells fantastic. I have a really sensitive nose, so some smells are more harsher than others. However, this candle smells like my childhood. One thing that I’m happy about though, since the candle is in a jar, is that the jar is a bigger than the Wonder Woman candle from a few boxes back. The candle also has some sparkly’s on top, which is very well done. It’s there, and you know its there when you look at the candle top, but the two colours (the wax and the sparkle colour) suit each one another very well. I am so looking forward to just having this candle open so the scent can waft about. When the candle is burning it’s even more beautiful. Hypnotic, even. I honestly love watching the wax melt with the sparkles flowing about.

The next thing I grabbed from the box is a Guardians of the Galaxy Volume 02, Pint Size Heroes. Apparently(!) you can collect them all. Of course, I was hoping for a Groot or Rocket PSH. I ended up getting Nebula, which I’m still pretty happy about! I’m wondering now where I can get more of these, ahaha. 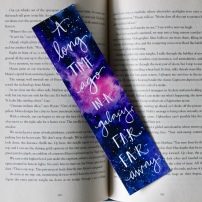 The pin for this month is a planet that looks like Saturn, but is probably inspired by something else, ahah. There’s also a cute Star Wars bookmark that I might just use when I re-read Zodiac! There’re so many pretty colours.

A mug is what I pulled out next. I adore the Lunar Chronicle series! I still haven’t finished reading the series though. I still have to read Winter! Maybe I’ll start off my re-read of the series by using the mug! The quote on the mug (if you can’t read it) says “Even in the future the story begins with Once Upon a Time” which I honestly loved that sentence when I first read it in the book. It’s great that the mug is also dishwasher and microwave safe! Almost all of my mugs aren’t dishwasher/microwave safe, so maybe I’ll end up using this new mug more often than not. 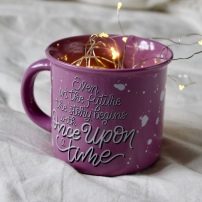 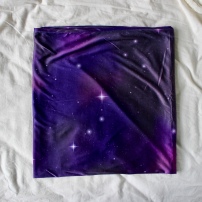 The next thing I pulled out was actually an infinity scarf! I have a cat themed infinity scarf that I absolutely love. Before this box I didn’t have any space themed clothes so I quite like the scarf! I won’t be able to use it until next winter but holy smokes its so pretty to look at. The purples and blacks blend so well together, and the stars here and there on the scarf just pop out. I’m so excited to wear this scarf when it gets super cold again! 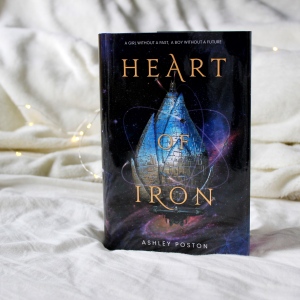 OwlCrate has done it again! I wanted to buy this book, but held off because I have other books I want to buy first. The book for March’s ACROSS THE GALAXY is Heart of Iron by Ashley Poston! I had my eye on Heart of Iron when I saw it on Netgalley a few months back. I held off requesting since I had quite a bit of books I have to read first, but I knew that I would read it when my library would buy it and put said book on the shelves. I know next to nothing about this book, and would like to keep it that way until I actually read the book. But holy SMOKES the cover is so pretty.

There’s also a little / medium sized poster with some characters on it. Seeing these characters made me even more intrigued about the story!

As of yet, I haven’t read Heart of Iron. Nevertheless I’m pretty intrigued about the story and what may transpire in it.

2 thoughts on “March ’18 OwlCrate Unboxing| Across the Galaxy”