Celaena Sardothien is Adarlan’s most feared assassin. As part of the Assassin’s Guild, her allegiance is to her master, Arobynn Hamel, yet Celaena listens to no one and trusts only her fellow killer-for-hire, Sam. In these action-packed novellas – together in one edition for the first time – Celaena embarks on five daring missions. They take her from remote islands to hostile deserts, where she fights to liberate slaves and seeks to avenge the tyrannous. But she is acting against Arobynn’s orders and could suffer an unimaginable punishment for such treachery. Will Celaena ever be truly free? Explore the dark underworld of this kick-ass heroine to find out.

The Assassin and The Pirate Lord

On a remote island in a tropical sea, Celaena Sardothien, feared assassin, has come for retribution. She’s been sent by the Assassin’s Guild to collect on a debt they are owed by the Lord of the Pirates. But when Celaena learns that the agreed payment is not in money, but in slaves, her mission suddenly changes—and she will risk everything to right the wrong she’s been sent to bring about.

I like the introduction that we have in this first novella. I also like that we get a huge inclination as to whom Celaena actually is and what she stands for.. As well as getting hints of her past.

The Assassin and The Healer

Meet the Assassin: beautiful, defiant, destined for greatness. Celaena Sardothien has challenged her master. Now she must pay the price. Her journey to the Red Desert will be an arduous one, but it may change the fate of her cursed world forever…

I like that this second novella isn’t told in only Celaena’s point of view. I’m glad that we get a taste of Yrene Towers’ story before everything happens with her.

Of the 5 novella’s in The Assassin’s Blade, The Assassin and the Healer is definitely one of my favourites.

The Assassin and The Desert

The Silent Assassins of the Red Desert aren’t much for conversation, and Celaena Sardothien wouldn’t have it any other way. She’s not there to chatter, she’s there to hone her craft as the world’s most feared killer for hire. When the quiet is shattered by forces who want to destroy the Silent Assassins, Celaena must find a way to stop them, or she’ll be lucky to leave the desert alive.

The Assassin and the Desert is one of the more bittersweet novella’s. I didn’t really care for Ansel’s character, but I know that this … development, almost friendship is very important to Celaena’s story.

I hope we see her again in the future!

The Assassin and The Underworld

When the King of the Assassins gives Celaena Sardothien a special assignment that will help fight slavery in the kingdom, she jumps at the chance to strike a blow against an evil practice. The misson is a dark and deadly affair which takes Celaena from the rooftops of the city to the bottom of the sewer–and she doesn’t like what she finds there. 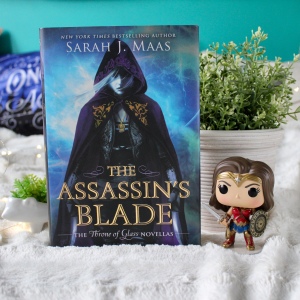 The Assassin and The Underworld feels like the longest novella in the history of novellas.  Aside from the romance that started between Celaena and Sam, this one was so lackluster.

The Assassin and The Empire

Celaena Sardothien is the assassin with everything: a place to call her own, the love of handsome Sam, and, best of all, freedom. Yet, she won’t be truly free until she is far away from her old master, Arobynn Hamel; Celaena must take one last daring assignment that will liberate her forever. But having it all, means you have a lot to lose . . .

When I first read The Assassin’s Blade, I had given it 5 stars. This time around, I’m giving it 3 stars.

Re-reading The Assassin’s Blade has really shown how much I did and did not miss the Throne of Glass series. However, I’m going to be re-reading the books 1-4, and then reading catching up with the rest of the series.

Have you read the Throne of Glass books?
If you have, what did/do you think of them?