A huge Thank-You to Simon & Schuster Canada, via Netgalley, for allowing me to read The Wicked Deep by Shea Ernshaw in exchange for an honest review.

To keep this review spoiler free, I’m going to be making this review as vague as possible. 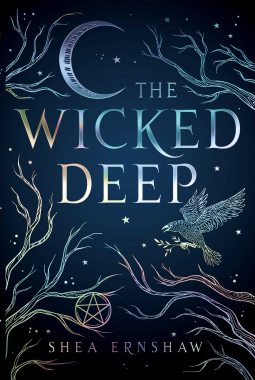 Hocus Pocus and Practical Magic meets the Salem Witch trials in this haunting story about three sisters on a quest for revenge—and how love may be the only thing powerful enough to stop them.

Welcome to the cursed town of Sparrow…

Where, two centuries ago, three sisters were sentenced to death for witchery. Stones were tied to their ankles and they were drowned in the deep waters surrounding the town.

Now, for a brief time each summer, the sisters return, stealing the bodies of three weak-hearted girls so that they may seek their revenge, luring boys into the harbor and pulling them under.

Like many locals, seventeen-year-old Penny Talbot has accepted the fate of the town. But this year, on the eve of the sisters’ return, a boy named Bo Carter arrives; unaware of the danger he has just stumbled into.

Mistrust and lies spread quickly through the salty, rain-soaked streets. The townspeople turn against one another. Penny and Bo suspect each other of hiding secrets. And death comes swiftly to those who cannot resist the call of the sisters.

But only Penny sees what others cannot. And she will be forced to choose: save Bo, or save herself.

One thing that I usually don’t like in books is insta-love. The characters in The Wicked Deep definitely have insta-love. For some reason though, I just took the insta-love in stride? I was okay with it.

In all aspects, The Wicked Deep was everything and nothing like I expected it to be. What I didn’t expect was what actually happened. What I did expect was that The Wicked Deep would be the start to a series. I’m glad now that it isn’t, since I have no idea where the story could go from how the book had ended.

With all that said, there were some things that I had predicted. Out of the 3 legitimate predictions I had made, none of them came true. However, there was something along the lines of “if THIS happens, then I hope that THAT happens.” Which it did.

Penny’s story is an interesting one. One that I will hope to remember for a long while yet.

The atmospheric setting that Ernshaw has created is great. I love how at times it feels like the characters are in another world. That they seem to go from a ‘real’ world to where things of Fantasy can happen.

Ernshaw has truly create a fold tale in the 21st century.

I’m honestly really happy with how The Wicked Deep has played out and ended. What surprised me the most about this novel however, was the plot twist. The plot twist! I didn’t even expect it, so when we read about when it happens it’s shocking.

To me, the ending to The Wicked Deep is beyond perfect. I mean, there was two times where the book could have ended and I’d been fine with that. But the story kept going on, until it stopped. The ending though…even though it’s bittersweet, warms my heart.

What makes The Wicked Deep different from any other book I’ve read is that (in vague terms, as to not spoil anything) I didn’t know where one character stopped, and another began, until it’s addressed. This moment completely blindsided me.

I give The Wicked Deep, 5 stars on GoodReads.