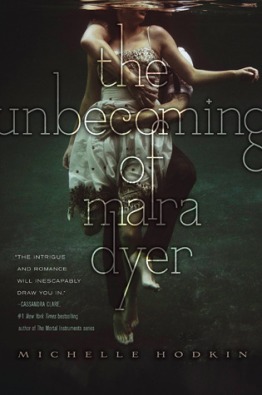 Mara Dyer doesn’t think life can get any stranger than waking up in a hospital with no memory of how she got there.
It can.

She believes there must be more to the accident she can’t remember that killed her friends and left her mysteriously unharmed.
There is.

She doesn’t believe that after everything she’s been through, she can fall in love.
She’s wrong.

This review is based on my reaction(s) to reading The Unbecoming of Mara Dyer for the second time.

I like that Noah got to open himself up to Mara, and I love that Mara got to confide in Noah, letting each other into the others’ lives. I appreciated that -aside from the powers that be- their relationship to each other is somewhat normal.

Something that I didn’t expect to like was the “Before” parts of the novel. These Before parts clue us in on some aspects of the novel that I believe, would otherwise be left out.

I love the writing in this novel to be honest. I was really worried that I wouldn’t be as into Mara’s story as I was the first time I read The Unbecoming of Mara Dyer. As it turns out, Hodkin’s writing is one of the few that I may be able to go back to over and over again — which is great!

I think what makes this book so interesting to me, is that even though throughout the book, Mara is telling the truth, yet she’s such an unreliable narrator. That in itself would be difficult to write, so props to Michelle Hodkin!

I’m giving The Unbecoming of Mara Dyer, 4 of 5 stars. I still really loved the writing and story, as well as Mara’s brothers, and some other factors.

Have you read The Unbecoming of Mara Dyer, yet? If you have, what are your thoughts on the novel?

One thought on “The Unbecoming of Mara Dyer, by Michelle Hokdin | Book Review #246”