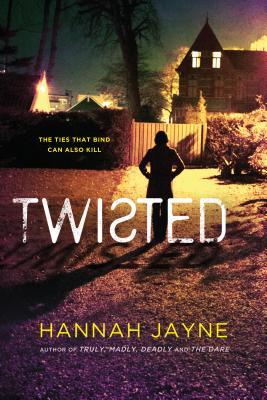 When her father is accused of being a serial killer, Bex becomes the ultimate bait in this game of cat and mouse

Bex is ready to start a new life in foster care. There, she won’t be known as a serial killer’s daughter. Though her father was never tried for the murders attributed to “The Wife Collector,” he disappeared after questioning. And Bex struggles with the guilt that she provided the circumstantial evidence that convicted him in the public’s perception—and drove him to abandon her.

But when a body turns up in her new hometown, all signs point to the Wife Collector. Bex’s old life isn’t ready to let her go. The police want to use Bex to lure in her father. But is she baiting a serial killer or endangering an innocent man?

Twisted is a Young Adult Mystery Thriller novel. Twisted is a stand alone that is filled with intrigue and a main character who can’t trust her own instincts.

When it comes to Hannah Jayne’s novels, I’ve come to realize that I have high hopes for her Mystery Thriller novels. I mean, Jayne’s writings are one of the few that don’t make me want to pull my hair out in frustration. Throughout every book of hers that I read, to put it bluntly: I don’t get bored from reading. 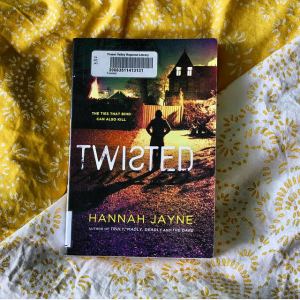 Bex is bullied a lot as a kid due to who and what her father is accused of, and this is visibly present throughout the book. We also see the after effects of Bex being bullied relentlessly as a child in her present teenage years.

Bex’s memories are scattered throughout the novel because she’s been running into these circumstances where these certain memories come back to her full force, and this often results in Bex having a panic attack.

I like how I got caught up in the thrill of the novel and how I fell so easily for perpetrators antics. Which was both thrilling and kinda scary, to be honest. It was scary how well this perpetrator was written, and how convincing everything surrounding this man was.

I’m a little bummed that the ending was so swift and blunt. I would have liked to see what happened with the aftermath of everything that happened. Saying that though, I am incredibly satisfied with how Twisted ends.

Just like all of Jayne’s other Mystery/Thriller novels, Twisted is a fast read. I think I read it within the span of 2-3 hours.

I ended up giving Twisted, 4 of 5 stars on Goodreads.

Have you read Twisted? What’d you think?