Mercy Thompson’s life has undergone a seismic change. Becoming the mate of Adam Hauptman – the charismatic Alpha of the local werewolf pack – has made her a stepmother to his daughter Jesse, a relationship that brings moments of blissful normalcy to Mercy’s life. But on the edges of humanity, a minor mishap on an ordinary day can turn into so much more…

After an accident in bumper-to-bumper traffic, Mercy and Jesse can’t reach Adam – or anyone else in the pack for that matter. They’ve all been abducted.

Through their mating bond, all Mercy knows is that Adam is angry and in pain. But she fears Adam’s disappearance may be related to the political battle the werewolves have been fighting to gain acceptance from the public – and that he and the pack are in serious danger. Outmatches and on her own, Mercy may be forced to seek assistance from any ally she can get, no matter how unlikely.

I’m going to admit that I found that Frost Burned was going south in terms of being interesting–the story was getting boring. So I’m 100% glad that Briggs brought another point of view into play during the last half of the book. — This POV doesn’t take up half of the book, rather, this persons point of view only appears when the story seems to lack something. And I’m 100% happy to say that the point of view I’m talking about is Mercy’s mate: Adam Hauptman. Yep! That’s right. Adam’s point of view is in Frost Burned, and I am so glad that Briggs took the opportunity to create Adam’s point of view. Without Adam’s view on things, Frost Burned wouldn’t have sat well with me, and might have honestly been my reason for not continuing on with the rest of the series. That isn’t the case though! I’ll be continuing on with the rest of the series soon!

I’m also glad that Stefan got back into the proverbial picture with this book. Stefan just brings a light to these books that some of these characters lack. With Stefan in the picture, that just means the whole gang is there together. Which I am so happy about.

I ended up giving Frost Burned, 3 of 5 stars on Goodreads. 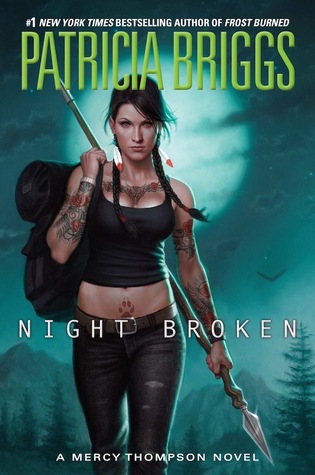 An unexpected phone call heralds a new challenge for Mercy. Her mate Adam’s ex-wife is in trouble, on the run from her new boyfriend. Adam isn’t the kind of man to turn away a person in need—and Mercy knows it. But with Christy holed up in Adam’s house, Mercy can’t shake the feeling that something about the situation isn’t right.

Soon, her suspicions are confirmed when she learns that Christy has the farthest thing from good intentions. She wants Adam back and she’s willing to do whatever it takes to make it happen, including turning Adam’s pack against Mercy.

Mercy isn’t about to step down without a fight, but there’s a more dangerous threat circling. Christy’s ex is more than a bad man—in fact, he may not be human at all. As the bodies start piling up, Mercy must put her personal troubles aside to face a creature with the power to tear her whole world apart.

Night Broken was one hell of a whirlwind to be honest. I still don’t really know what to think of the book, but I want to try and get my thoughts down.

I hated how Christy was brought back into the story. In my opinion, Christy was 100% better off as a distant memory. Christy is manipulative in all kinds of ways. No joke.

There are things that I won’t talk too much about, but I know that Mercy deals with so much in Night Broken. It’s like the universe just took a dump on Mercy and then left, so Mercy would have to be the one to clean up the mess.

The “bad guy” issues weren’t really resolved, which is a first, I believe, but also not all that surprising. I honestly feel like Briggs brought 4 different novela’s together and turned them into a 341 page book.

I ended up giving Night Broken 3 of 5 stars on Goodreads.

Have you read any of the Mercy Thompson novels? What did you think of Mercy and her story line?