Killer Frost is the 6th and final book in the Mythos Academy series by Jennifer Estep. There will be spoilers in this review. 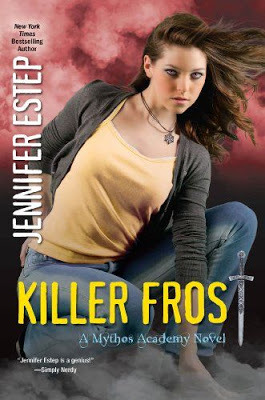 ‘I’ve battled the Reapers of Chaos before–and survived. But this time I have a Bad, Bad Feeling it’s going to be a fight to the death … most likely mine.

Yeah, I’ve got my psychometry magic, my talking sword, Vic–and even the most dangerous Spartan on campus at my side, in Logan freaking Quinn, but I’m no match for Loki, the evil Norse god of chaos. I may be Nike’s Champion, but at heart, I’m still just Gwen Frost, that weird Gypsy girl everyone at school loves to gossip about.

Then someone I love is put in more danger than ever before, and something inside me snaps. This time, Loki and his Reapers are going down for good … or I am.‘

If I thought there was a lot of action in the last 5 books, then Killer Frost has twice that.

In Killer Frost, everything leads up to the ending. We’re given a little reminder as to just how much Gwen loves her friends, and how much her friends love Gwen. They’ll do anything for one another.

I’m a huge action fan, so reading all this action was great. Every scene had different pacing (as all fight scenes are slightly different from one another), which was very entertaining. I loved that Gwen was just as badass as she always was. Gwen’s badass-ery was amplified in Killer Frost.

And I’m incredibly happy that the series ended on a good note. I don’t know what I’d do if I finished Killer Frost and discovered that the ending had ended in a way it wasn’t supposed to.

I ended up giving Killer Frost 3 of 5 stars on Goodreads.

One thought on “Killer Frost, by Jennifer Estep | Book Review #189”