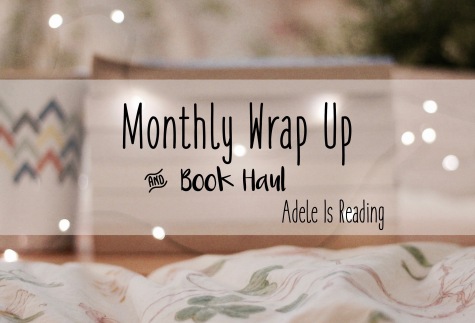 It has snowed off and on all of February; which is short of a miracle, I believe. I don’t think it’s snowed in February here in my part of Canada since 2007, maybe? Even the news has said that it’s rare for Vancouver to get this much snow in our Winter season. I think we’ve gotten around 68cm(?) of snow. Usually this happens only every ten years. Anyway, lets get on to reviewing what I’ve done and read this past month, shall we?

My February TBR consisted of four books: Harry Potter and the Philosopher’s Stone Illustrated Edition, illustrated by Jim Kay, Hereafter by Tara Hudson, Inhuman by Kat Falls, and Mistwood by Leah Cypress. I unfortunately only got around to reading one of the four books this month (Hereafter).

The Books I Received/Bought this month:

*via the author
**via Netgalley
***via Instafreebie

I’ve somehow managed to read 14 books this month! How surreal is that?! I feel like I have no time lately, so having managed reading these books was great.

There are 2 books that I marked as DNF this month.

Ultimately, I couldn’t get into the story as much as I had wanted to, and DNF’d the story pretty early on into the book.

I couldn’t get into reading Last Seen Leaving, but I really wanted to know what happened. So I read the first 64 pages and then skipped to the ending.

The Books I’ve Reviewed this month are:

Library Reads #23; where you can read the books that I’ve borrowed from the library recently!

TBR #24, TBR #25; Here are a few books that have been on my tbr for a while. Hopefully I’ll get to reading them soon!

4 Disappointing Books; Books I DNF’d Part 2; Lately I’ve been letting books go when they no longer hold my interest.

That’s all for my February Wrap Up. If you’re interested in my little “Other general thoughts of late” you can read those down below. I’m going to be mentioning a few playlists, and thoughts that I thought would be worthwhile to put out into the world. Kind of like a diary/journal, but not really.

Thank you for stopping by and reading!

Places You Can Find Me At:

If there are other places that you want to connect with me, here they are!:

Other general thoughts of late:

I’ve been listening to a few 8tracks playlists this month. The Sky Is Crying For Me, which I used a few times this month, since I have trouble sleeping. how i would spend my sundays if i were a cat, morning champion, little flower market, Meow Loading…, Backyard Adventures, – Everything is Beautiful –, & Songs to chop vegetables to, are all playlists that I’ve listened to a few times over. I think my favourite though, would be Meow Loading…, since the playlist is perfect elevator music and background noise.

I’m actually getting around to reading all of the books that I’ve borrowed from the library! Which to me is something incredibly exciting seeing as how I usually only get to read a few of the books I’ve borrowed before they’re due back (and I’m unable to re-new them).

New Fun Fact about me: I think I’m going to make it a point to visit my local library every Sunday. I was there one of the Sunday’s this month and holy smokes, I was able to relax so well. I felt as if I could melt into the shelves. And the slow chill vibe that the library had on Sunday was A++.

My nephew was born(!) on February 21st! So I’m officially an auntie! I don’t think it’s gone through my head really, that my brother is a parent now. I didn’t think that he’d ever have a kid, but now that he has one, I don’t think I can imagine him without one. — And now that I’m an aunt? That fact hasn’t really sunk in yet. I don’t think it will until my nephew is a toddler, and has a mind of his own.

2 thoughts on “﻿February Wrap Up”