“Until now, he’s existed only in her dreams –
but fate is about to bring them together. 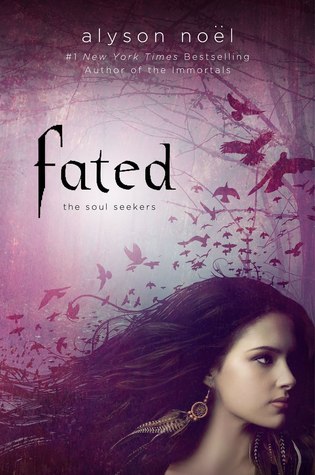 I shove through the crowd, knocking into girls and bouncing off boys, until one in particular catches me, steadies me.
I feel so secure, so at home in his arms.
I melt against his chest-lift my gaze to meet his. Gasping when I stare into a pair of icy blue eyes banded by brilliant flecks of gold that shine like kaleidoscopes, reflecting my image thousands of times.
The boy from my dream.
The one who died in my arms.

Strange things are happening to Daire Santos. Crows mock her, glowing people stalk her, time stops without warning, and a beautiful boy with unearthly blue eyes haunts all her dreams. Fearing for her daughter’s sanity, Daire’s mother sends her to live with the grandmother she’s never met. A woman who recognizes the visions for what they truly are—the call to her destiny as a Soul Seeker—one who can navigate the worlds between the living and dead.

There on the dusty plains of Enchantment, New Mexico, Daire sets out to harness her mystical powers. But it’s when she meets Dace, the boy from her dreams, that her whole world is shaken to its core. Now Daire is forced to discover if Dace is the one guy she’s meant to be with…or if he’s allied with the enemy she’s destined to destroy.”

Fated is the first book in four-part series, by Alyson Noel. There may be spoilers in this review.

I liked how the story became one of standing up for yourself, and to fight for the people you love. And yes, I’m saying it…. A story of fate.

I appreciate how there’s only one point of view in Fated, from the main character Daire. — I still don’t know how to pronounce her name? I keep pronouncing it like Dairy, but I hate that so I kept pronouncing ‘Daire’ as ‘Dare’. After reading a few books that had multiple points of view, I always look forward to reading a book that I know will have only one POV.

There were quite a few things that I enjoy knowing about now that I’ve finished Fated. Like Daire grew so much as a character in this novel. Not even kidding. The personal growth she had doesn’t seem like much, but to me there were a lot of things that stuck out to me that I enjoyed.

I don’t like the fact that I can feel somewhat of a love-triangle going on between 3 of the characters. I can just tell that the three of them will become a thing in the next book. The next book is titled Echo.

I ended up giving Fated 3 of 5 stars on Goodreads.