‘I think about love and what I deserve and how I’m trying to accept everything the universe is giving me.’

“We are seventeen and shattered and still dancing. We have messy, throbbing hearts, and we are

stronger than anyone could ever know…

Jonah never thought a girl like Vivi would come along.

Vivi didn’t know Jonah would light up her world.

Neither of them expected a summer like this…a summer that would rewrite their futures.

In an unflinching story about new love, old wounds, and forces beyond our control, two teens find that when you collide with the right person at just the right time, it will change you forever.”

This review may contain spoilers.

There are two alternating points of view in When We Collided. The views are those of Vivi, and Jonah.

Vivi is an enigmatic girl who, well, is difficult to understand. Vivi seems to do things on a whim. If she’s up for it, she’ll do it. Vivi also seemed very…uncontrolled.

Jonah is the kind of person who’ll take on responsibilities that aren’t his own, if the need arises. I mean, all he wants to do is be a normal teenager, but his past which has caught up to his present, which means that he has new challenges that he works with.

Both of these kids had me laughing within the first 80 pages. Which is rare for me, especially with Contemporary novels. Vivi and Jonah are incredibly cute together and apart. I stress the apart because they get so caught up in one another that they -if my memory serves correctly- lose sight of their surroundings. They’re both focused on the other, even when apart.

‘A nightmare, a memory. A thing we can be both.’

In my opinion, this book had a great ending that pulled those heart strings! The ending was definitely an emotional one. Both of these characters have their teenager years to work through.

Throughout the book you can just tell that Vivi’s progressively getting worse, with her Bipolar Disorder. Which puts a strain to her. Like everything that she does around you, or for you, you have to take with a grain of salt.

Jonah is slowly drowning under the pressure that is taking care of the littles, his job, and soon Vivi as well. 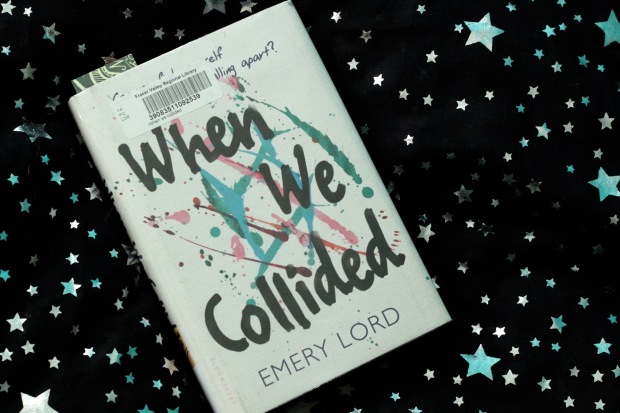 ‘”Isn’t that a great word, anthropomorphic? I’m not sure if I said that right, but who the hell gets to decide how people use language anyway?’

I like the above quote a lot because it’s completely true! The quote is also true in the way that people pronounce words. People who are learning English pronounce words a little differently than those of us who were raised speaking English, and sometimes even I have difficulty pronouncing words!

By the time I got to the last stretch (100 or so pages) of the book, I had to take a break from reading. I think I took a two day break form reading When We Collided, because the book just got to be too much for me to handle. The emotions were running too high for me to handle!

Very realistic -duh, Adele- but like not a lot of books portray characters with Bipolar Disorder, so to see that, and to see another aspect of a kids life; what he does for his family, is incredibly surreal. I would think that, as a whole world, we don’t think about kids who take on adult responsibilities. And when we do hear about them, we tend to praise the parents for being such good parents, when it was the parents that put their kids in those situations in the first place!

We all expect to live a certain way, but then life happens, shit happens, and we have to learn to live with what we’ve been dealt.

‘Ships are safe in harbour, but that’s not what they’re for.’

If you ever wanted to read a book about two characters who were great for each other, but it just wasn’t their time to be a couple, then this is it.

I ended up giving When We Collided 3 out of 5 stars on Goodreads.

One thought on “When We Collided, by Emery Lord | Book Review #164”