“Sonya was born with the rare gift to feel what those around her feel—both physically and emotionally—a gift she’s kept hidden from the empire for seventeen long years. After a reckless mistake wipes out all the other girls with similar abilities, Sonya is hauled off to the palace and 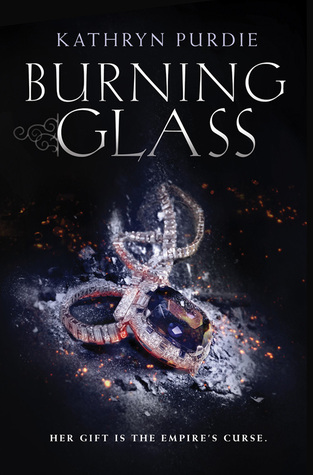 forced to serve the emperor as his sovereign Auraseer.

Tasked with sensing the intentions of would-be assassins, Sonya is under constant pressure to protect the emperor. But Sonya’s power is untamed and reckless, and she can’t always decipher when other people’s impulses end and her own begin. In a palace full of warring emotions and looming darkness, Sonya fears that the biggest danger to the empire may be herself.

As she struggles to wrangle her abilities, Sonya seeks refuge in her tenuous alliances with the charming-yet-volatile Emperor Valko and his idealistic younger brother, Anton, the crown prince. But when threats of revolution pit the two brothers against each other, Sonya must choose which brother to trust—and which to betray.”

Comparing the vibe that the synopsis gave me versus the actual book, the two are pretty much completely different. And now that I know the significance of the necklace, and the ash, the cover for Burning Glass is actually very powerful — once you read the book that is.

Sonya, the main character is so emotionally vulnerable, yet it is her vulnerability is what makes Sonya such a strong character. Sonya she endures so much in the duration of this novel. She experiences heart break, and loneliness, and a ton of other emotions, both with in herself, and from other people. Sonya grows immensely in the duration of this book as well. By the end of the book versus the beginning of this book, Sonya is practically a different character. And she’s learned so much about her powers as well.

I have to say that Burning Glass is a pretty good story. The pace of the story is fast enough that the world really blurs into what feels like a few weeks, but is actually way longer than that. The way that this book was written — like, the characters belief system made me angry. I don’t care at all for the love triangle. Frankly, I hated one of the characters in that triangle — who by the way, is crazy.

For me, the book started going downhill about halfway/three-quaters through the book. I thought that I would actually end up giving up on this story. I’m glad I didn’t. I’m glad I stuck with Sonya and her story until the end of this book. Unfortunately for me, Burning Glass is a first in a series/trilogy/whatever it ends up to be. I totally understand though! The author couldn’t possible fit everything into one book. If she did that I would think that there would be leaps and jumps in the story causing the book to not make any sense whatsoever.

However, with Burning Glass, while there are jumps in the story, it’s only because for Sonya, she did the same thing everyday. And that would really bore the reader, so I’m glad, in a sense, that Burning Glass is part of a series.

All in all, I ended up not liking Burning Glass as much as I thought I would have. I had high hopes for the story, and I guess that was my downfall. I can only hope that the next book is better.

“Tosya gave a little shake of his head and spared me a glance that said he might kill me later.”

That’s all for my review of Burning Glass by Kathryn Purdie. If you’ve read Burning Glass, what did you think of the story?? I’d love to know!

Thank you for reading!
Adele

One thought on “Burning Glass, by Kathryn Purdie | Book Review #145”