I was super excited to read this instalment in the Mercy Thompson series. Iron Kissed is the third book in the series, and to put it bluntly: there were a lot of feels. I’m also putting a Read More up, because there will obviously be spoilers.

“Mechanic Mercy Thompson can shift her shape – but not her loyalty. When her former boss and 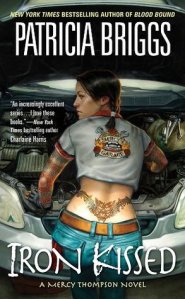 mentor is arrested for murder and left to rot behind bars by his own kind, it’s up to Mercy to clear his name, whether he wants her to or not.

Mercy’s loyalty is under pressure from other directions, too. Werewolves are not known for their patience, and if Mercy can’t decide between the two she cares for, Sam and Adam may make the choice for her…“

I didn’t know what I expected from this book, but I am so glad that I got my hands on it. (My local library didn’t actually have a copy of this book so I had to go to my other library to get it.) Which is totally fine because the library where I got this from, I’ve now dubbed my “indie” library. This library has books that my other two libraries don’t have. Anyway…

The Mercy Thompson series is evolving in so many ways. From how the Werewolves did something I didn’t think they would ever do, to introducing some new characters, and abilities that I never dreamed would be real. Yet they are in the Mercy Thompson world, and that is just….amazing to me. It’s mind-boggling that it’s possible, but now that I’ve read it, and seen it in my mind, I can’t help but think that I’m an idiot for not thinking of that before.

this book is actually about Zee, and how he get’s framed for murder. And the lengths that Mercy goes to, to save her former mentor and friend. Mercy goes to incredible lengths. But not even Mercy is safe from the true suspect.

I really enjoyed reading Iron Kissed. Like, really enjoyed reading this story. I am loving seeing where all the characters are going, and especially how they’re developing in their own little ways. Throughout the books, I’ve realized there’s a sense of family within the pack. And I’m not just saying that because the pack is a pack. They really do seem to genuinely care about each other in their own way. — That’s honestly saying that because with other Shifter novels I’ve read, there’s always someone within the pack trying to tear them all apart.

I loved seeing this new side of Warren throughout the book. I’ll admit we don’t see his character that often, but when we do see him, it’s like a breath of relief. I feel like Warren is a highly underrated character, and I am so hopeful that we see and get to know him more throughout the rest of the series!!! Although, this only means that there’s a high chance of him dying!! DON’T KILL WARREN, PLEASE!!!!

I like some of the comebacks that the characters have. They can be so snarky, and honestly, I love that so, so much.

There were new depths to a person; a certain character, which we didn’t see from the character before. But now that we have seen it, their behaviour is like a big slap to the face. Like, “Adele, get your head on straight. They were a dick for a reason.”

All of this is me just trying to say that I am so reading the next book. The Mercy Thompson series is getting better with every book!

One thought on “Iron Kissed by Patricia Briggs | Book Review #134”